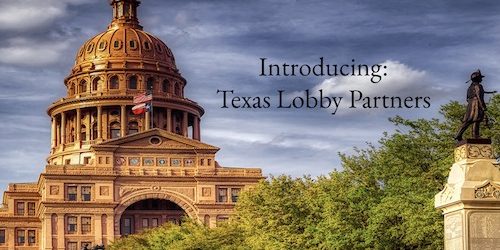 Mike Toomey announced today that he is forming a new partnership with lobbyist Marc A. Rodriguez. The new venture, Texas Lobby Partners LLP, will also include Carrie Simmons as a partner. Simmons and Toomey have worked together since 2014.

The many decades of combined experience of the Texas Lobby Partners team will provide an immediate benefit to current clients and an exceptional opportunity for future clients, especially in the unparalleled legislative environment created by the COVID-19 pandemic.

“The new partnership is an excellent transition to the next level of my career as a contract lobbyist,” Rodriguez said. “I have worked effectively with Mike and Carrie on clients such as Texas Central and the City of San Antonio. I am confident that our collaboration will translate to significant added value for prospective clients.”

Rodriguez, Simmons, and Toomey have complimentary skillsets, deep legislative expertise, and extraordinary dedication that make this new venture an ideal alliance and a natural next step.

“We have enjoyed a multi-year friendship with Marc and have seen firsthand his commitment to success for his clients,” Toomey said. “I look forward to being a part of a team that can effectively advocate to every member of the legislature for years to come.”

Rodriguez began his career at the Greater San Antonio Chamber of Commerce and city hall in San Antonio, Texas. He maintains a second office and a significant presence in San Antonio. He has owned his lobby firm for over 20 years and represented major clients such as UnitedHealth Group, the LaMantia family, Motorola, and D&M Auto Leasing for multiple legislative sessions.

Mike Toomey, a former legislator, is the only person in Texas history to serve as Chief of Staff to two Texas Governors (Govs. Rick Perry and Bill Clements). He recently returned to his lobby practice after serving as Chief Operating Officer of Gov. Greg Abbott’s Strike Force to Open Texas. Toomey brings a work ethic that has been legendary since 1985.  He approaches issues with zeal and tenacity that even his adversaries admire.

After starting her lobby role in 2014, Carrie Simmons was immediately named #1 “Rising Lobby Star” by Capitol Inside. Previously, Carrie was the Executive Director of the Texas House Republican Caucus. She provided legislative research and communication assistance to all 95 Republican Legislators in the Texas House of Representatives for over six years, three legislative sessions, and multiple special sessions. In that role, Carrie worked directly for the Caucus leadership, including Sen. Kelly Hancock, Sen. Larry Taylor, and Sen. Brandon Creighton.

The work of Toomey and Simmons has grown to include an impressive list of Fortune 500 companies and leading organizations as clients, including but not limited to: Liberty Mutual, AT&T, Merck, the Texas Hotel & Lodging Association, and Texans for Lawsuit Reform.