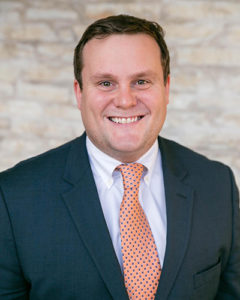 Matthew Bentley is a lobbyist, political consultant and an expert in public positioning, issue management and government relations. His success is the product of extensive relationships with elected officials and staff throughout the legislative and executive branches as well as regulatory agencies. A native of East Texas, he was recently named a Top Ten “Rising Star” lobbyist by Capitol Inside, a bi-partisan publication covering Texas politics and government.

Matthew is widely acclaimed for his work in political campaigns throughout Texas and the United States. In 2018, he had a 100 percent win rate consulting for Cody Harris’ campaign for the Texas House of Representatives, U.S. Congressman Lance Gooden’s open-seat race for Congress and judicial races throughout East Texas. He also served as Campaign Manager for State Representative Byron’s Cook successful 2016 campaign for re-election – one of the highest-profile and most seriously contested races of that cycle.

Matthew began lobbying independently during the 83rd Legislative Session (2013). Among his clients are the nation’s largest telecommunications company, the state’s leading utility association, one of the world’s top stock market exchanges, the largest waste management and recycling business in the state, a mining operation, an oil and gas trade association, a Class A water utility, a conservative tort reform organization, several transportation infrastructure projects, various landowner groups, a number of Texas wineries and a non-profit cancer research foundation.

Before launching his practice, Matthew contracted with Reggie Bashur, Cliff Johnson, Clay Pope and Luis Saenz during the 82nd Texas Legislature (2011) to help serve and represent their clients’ broad range of interests before the Texas Legislature and agencies throughout the state.

During the 81st Legislative Session (2009),  Matthew worked for Commissioner Todd Staples at the Texas Department of Agriculture, as the Commission underwent the Sunset review process.

Matthew presently serves on the advisory council for Texan by Nature, a non-profit organization founded by Former First Lady Laura Bush, which focuses on safeguarding the environment with respect to private property interests and economic development. He remains involved with the Texas GOP’s Mighty Texas Strike Force, and served as the Virginia Co-Captain for the 2016 General Election. He is a proud graduate of The University of Texas at Austin.